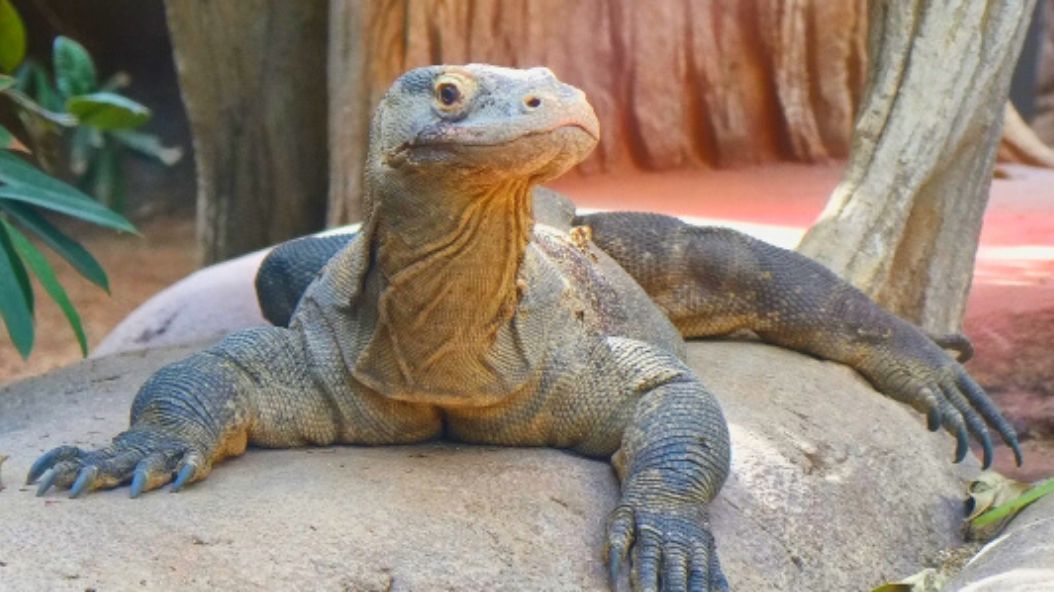 The Barcelona Zoo Foundation is organising and sponsoring a symposium in English on the conservation of the Komodo dragon. Experts in the scientific and zoological communities will be meeting in Barcelona to share the practices and systems used for managing Komodo dragons.

On Thursday 5 March, there will be a symposium on the conservation of Komodo dragons in the function room at the Col·legi Oficial de Veterinaris de Barcelona.

Experts from around the world will be presenting the latest developments, latest knowledge and the future of conservation, as well as the well-being and significant pathology of Komodo dragons, which act as a kind of umbrella species in conserving their habitat and the rest of the species that share it.

So it is a unique opportunity to find out more about integrating conservation in situ and ex situ, and the efforts to protect this species. 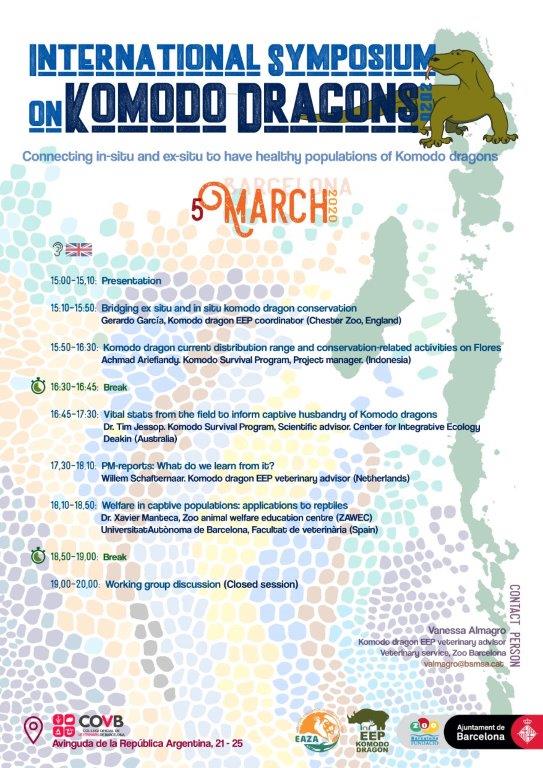 Dr Tim Jessop is a senior lecturer and ecologist at Deakin University’s Centre for Integrative Ecology. A key component of his research interests have been the establishment (in 2002), and continued involvement, in a large-scale population monitoring program for Komodo dragons in protected and non-protected areas of Eastern Indonesia.  Through these long-term studies, Tim and his Indonesian colleagues from Komodo Survival Program have gained many valuable insights into the lives of wild Komodo dragons. In his presentation, he will discuss multiple topics that will explore Komodo dragon biology, ecology and their current and future conservation challenges.

Dr. Xavier Manteca Vilanova received his BVSc and PhD degrees from the Autonomous University of Barcelona and an MSc in Applied Animal Behaviour and Animal Welfare from the University of Edinburgh. Currently, he is full professor of animal behaviour and animal welfare at the School of Veterinary Science in Barcelona. One of his main areas of interest is the welfare of wild animals under human care. Xavier is a diplomate of the European College of Animal Welfare and Behavioural Medicine.

Dr. GERARDO GARCÍA was born in Barcelona (1969, Spain) is the Curator of Lower Vertebrates and Invertebrates for Chester Zoo since March 2012.

He has been Head of the Herpetology Department at Durrell Wildlife Conservation Trust based in Jersey, United Kingdom (UK) since 2003 until 2012. His professional career started at Barcelona Zoo and at the Science Museum of Barcelona (CosmoCaixa) up until 1996 when he moved to work at Thoiry Zoo (Paris, France).

Gerardo completed a Ph.D. at the Institute of Conservation and Ecology (DICE), University of Kent on the “Ecology, human impact, and conservation of the Madagascan side-necked turtle (Erymnochelys madagascariensis) at Ankarafantsika National Park”, where he lived for two years during his data collection and field work in Madagascar. Gerardo analyzed his data and began to write his thesis at the Laboratoire des Reptiles et Amphibiens, Muséum d’Histoire Naturelle of Paris, moving to Jersey in 2001.

His work with amphibians began in 1992 at the Barcelona Zoo being involved during the early years of the Recovery Programme for the Mallorcan midwife toad. Since then he has been involved with captive breeding programs of reptiles and amphibians in several institutions, linking ex situ with in situ conservation in Jersey (Rana dalmatina and Bufo bufo), Montserrat/Dominica (Leptodactylus fallax), Madagascar (Erymnochelys madagascariensis, Pyxis planicauda, Astrochelys yniphora, Mantella aurantiaca, M. cowani), Spain (Calotriton arnoldi, Alytes obstetricans and Rana iberica), Mauritius (Nactus coindemirensis and Gongylomorphus fontenayi sp.), Mexico (Goodeid fishes, Ambystoma dumerilii) and recently in Bermuda (Plestiodon longirostris, Poecilozonites bermudensis and P. circumfirmatus). During the last few years he has been involved in various training initiatives for amphibians around the world (Colombia, Dominica, France, Germany, India, Madagascar, Mexico, Spain, Montserrat, South Africa, Sri Lanka, Sweden and Venezuela), improving the husbandry protocols of captive colonies and diverse in situ programs such as the Mountain chicken frogs (EAZA EEP Coordinator), genus Alytes and Rana in Spain and the amphibians of Jersey. Since 2012 he is also EAZA EEP Studbook Coordinator for the Komodo dragons and 2016 for the Achoques (Ambystoma dumerilii).

Gerardo has been actively involved in the European Association of Zoos and Aquariums (EAZA) as chair of the Amphibian Taxon Advisory Group (ATAG), member of the Conservation Committee and previously vice-chair for the Reptile TAG. He’s also member of several IUCN Specialist Groups. His major goal is to bring in situ conservation and research for these programs into the core of the EAZA. Gerardo was actively involved in the development of the Amphibian Campaign of the Year of the Frog 2008 and co-directed the first amphibian conservation courses in Europe for Zoos and Aquariums in 2006 continuing until now.

During his first years at Chester Zoo has been directly involved on the development of the large collection of reptiles, amphibians, fishes and invertebrates to the new projects. One of the latest developments is the Collection Plan for the new project of Islands and implementation of the research and conservation species for Chester Zoo. He also developed the in situ conservation programmes linked with his Departments in countries like Mexico, Madagascar, Bermuda and Indonesia as the diverse applied research projects to support animal welfare and conservation.

Gerardo also takes a great interest in raising the profile of the programmes within both specialist groups and the general public. He also assists other zoological institutions in the development of their animal collections, design exhibits, training staff, off show facilities and the development of new research conservation programs.