Publication of The Third Atlas of Nesting Birds of Catalonia 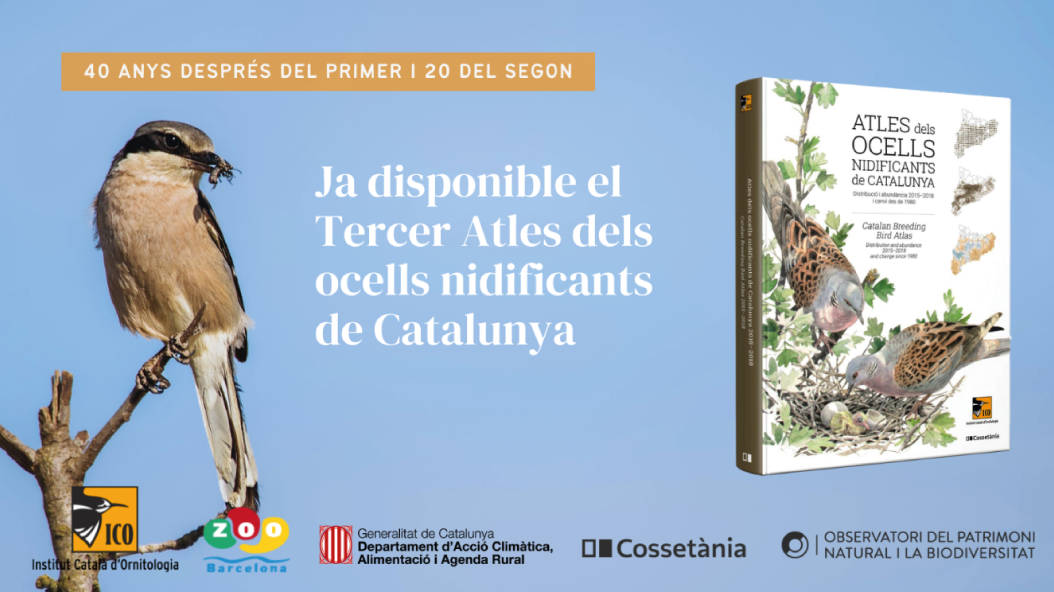 The Tercer atles dels ocells nidificants de Catalunya [Third Atlas of Nesting Birds of Catalonia], a project developed by the Catalan Ornithological institute (ICO) that takes a close look at all the bird species that nest in Catalonia, was presented today. In the 639-page book published by Cossetània, you can learn about each species, its distribution and estimated population, how often it is spotted and how its population has evolved over the last 40 years.

The Atlas shows that Catalonia boasts 233 bird species that habitually nest there. This is 17 more than 40 years ago and accounts for 39% of all nesting species in Europe. In total, 124 of these enjoy some form of special legal protection in Catalonia, Spain or Europe. According to the Atlas, it is estimated that around 8 to 12 million pairs of birds breed in Catalonia each year. The house sparrow remains the region's most abundant species, with just under 900,000 breeding pairs, although its numbers have clearly dwindled in recent decades. It is followed by the European serin, the robin, the nightingale and the common chaffinch, all of which have over 400,000 pairs. More than half of the remaining species have less than 2,000 breeding pairs and are considered rare. Catalonia's rarest nesting species are the Dupont's lark, the hen harrier, the Baillon's crake, the red-knobbed coot and the black-necked grebe, with less than 10 breeding pairs each. On the other hand, 9 exotic species that regularly breed in Catalonia had been registered by the close of this third edition. Most of these have been introduced by humans as caged pets that have escaped. This can be seen in their geographical distribution, which shows that they live mostly in and around large cities and coastal towns. When the first Atlas was published, only one exotic breeding species in Catalonia, the common pheasant, was reported.

The Catalan Ornithological Institute (ICO) presented this work today at the Auditorium of the Cartographic and Geological Institute of Catalonia as part of a challenge driven by the Generalitat de Catalunya's Ministry of Climate Action, Food and Rural Agenda and Barcelona Zoo. The data were obtained thanks to the fieldwork carried out between 2015 and 2018 by 1,275 volunteer ornithologists. The Atlas also features work by researchers from the European Bird Census Council, CREAF and the Forest Sciences and Technology Centre of Catalonia (CTFC), among others. Barcelona Provincial Council has helped collect data in the province's natural areas, and the Museum of Natural Sciences of Barcelona has provided a place for the ICO team to work. The Bird Atlas project is part of the Observatory of Natural Heritage and Biodiversity of Catalonia, and as such is intended to be available to society as a whole to inform decisions relating to nature.

"The knowledge provided by this Atlas is key to the design of biodiversity conservation policies," stated Sergi Herrando, Managing Director of the Atlas and researcher at the ICO, CREAF and the European Bird Census Council (EBCC). Herrando noted that the potential for these policies to be effective has been proven. An example of this is the lesser kestrel, which now has over 80 breeding pairs as a result of the reintroduction programme. He also mentioned that Catalonia has a great responsibility regarding the conservation of many species, “such as those that live almost exclusively on the Iberian Peninsula, including the red-necked nightjar, the Iberian green woodpecker and the Western orphean warbler, almost 10% of whose European distribution area is in Catalonia.”

"The Zoo didn’t hesitate to support this innovative project, which forms part of a discipline – ornithology – with a long tradition in Catalonia, one that makes us European leaders in the study of birds, a key tool for their conservation, which is precisely Barcelona Zoo's mission," explained the Vice President of the Barcelona Zoo Foundation, Xavier Paton.

The evolution of 40 years of data, winners and losers

The publication of the Atlas being presented today comes almost 40 years after the first edition, and 20 after the second. Thanks to a considerable amount of aggregated data, this time the Atlas has been able to focus in-depth on the changes undergone by species since the early 1980s and 2000s. “This period coincides with the most significant evolution of climate change and other large-scale social and economic changes that have had a major impact on Catalonia, such as the loss of traditional agricultural activities and the resulting occupation of abandoned areas by forests and scrubland”, stated ICO researcher Martí Franch, who is one of the main authors of the work. This coincidence in time has proven that not all bird species have reacted to these changes in the same way. Forest and urban species, for example, have generally done quite well. The growth of new forests and the maturation of a large proportion of existing ones has resulted in much larger distribution areas for some forest species – such as the booted eagle or the lesser spotted woodpecker – that were very rare 40 years ago. For now, other species that are more closely linked to dry forests, such as the Western Bonelli's warbler, seem to be doing well as a result of the expansion of forested areas and perhaps also the drier conditions of the Mediterranean basin brought about by climate change, and numbers have greatly increased in the last 20 years. “However, not all forest birds are doing well: some species that need cold, humid forests, such as the Eurasian bullfinch, are significantly declining in numbers, probably as a result of climate change and the way these forests are managed,” explained Sergi Herrando. And the populations of some urban species, such as the Eurasian collared dove, that were recorded as very rare and non-breeding in the first Atlas, have now substantially increased.

At the other end of the spectrum, the populations of some endangered species, such as the barn owl, the Iberian grey shrike and the European turtle dove, have dwindled very significantly in recent decades, and have already completely disappeared from 20-60% of the areas where they lived 40 years ago. All three of them are typical of agricultural areas and fields, the types of species that are suffering the greatest decline in numbers, particularly in mountain areas. This is due not just to the growth of new wooded areas on abandoned cropland and pasture, but also to the transformation of agricultural land and forest into intensive areas of monoculture for crops that require large uninterrupted spaces for cultivation. "These crops make life difficult for species that feed out in the open but nest in wooded or bushy areas. One such species is the European turtle dove, which has almost completely disappeared from the Pyrenees and is becoming increasingly rare in much of Catalonia," stated Lluís Brotons, a co-author of the Atlas and a researcher at CREAF, the ICO and the Forest Science and Technology Centre of Catalonia (CTFC). Furthermore, monocultures often use phytosanitary treatments, against insects and small vertebrates for example, and these also end up affecting the species that prey on them. "This is what happened with the barn owl and the Iberian grey shrike, among others," concluded Brotons.

On the other hand, the little egret, the common gallinule and other species usually found in rivers and marshes saw their numbers rise significantly, and their distribution expand, when many wetlands were declared protected areas in the late 20th century. However, this general expansion process has ground to a halt in the last two decades, with significant losses recently detected in Catalonia's larger wetlands, where for a variety of reasons some species have started to see their numbers fall. "In the case of the little egret, it seems that the shortening of flooding periods in the rice fields has something to do with this," explained Martí Franch.

As for seabirds, the Atlas shows that, although they have maintained their populations, they are under significant threat. Twenty years ago, most of the world's breeding population of Audouin's gulls was in Catalonia, in the Ebro delta, but in the last few years it has gradually spread to other places, coinciding with a fall in the number of breeding individuals. Herrando suspects that "This decline may be partly due to accidental deaths caused by some types of fishing gear, but the arrival of land predators – mainly foxes – in the delta colony is definitely a factor." It is also a factor in the local decline of other marine species, particularly where they are highly concentrated in breeding colonies, as is the case of the Eurasian oystercatcher, which has just under 20 breeding pairs in a single population threatened by the erosion of the coastline of the Ebro Delta.

According to the Ministry of Climate Action, Food and Rural Agenda, key information can be garnered from this third Atlas, and by comparison with the two preceding editions. According to Antoni Ferran, Director General of Environmental Policy and the Natural Environment, “this book can help us gain a better understanding of the environmental pressures affecting our birds and, by extension, our ecosystems, to help the public administration take corrective action”.

Thanks to the Atlas, we not only know which species nest in Catalonia, but also have information about their distribution, and whether or not this has altered as a result of climate change. Overall, the data indicates that in general there are more native species in the northern half of Catalonia, particularly on the plains and valley floors. Cerdanya stands out as a hotspot of biodiversity due to the great variety of different habitats in the area. In addition, and contrary to observations made in Europe as a whole, in general native species in Catalonia have not systematically moved to the north or to higher altitudes over the last 20 years in response to climate change. "We live in a complex and rapidly changing world and – like us – birds are trying to adapt. Using the myriad stories in this Atlas, we’ll try to learn a bit more about how to do so", explained Sergi by way of conclusion.