The Zoo's lions have a new home! 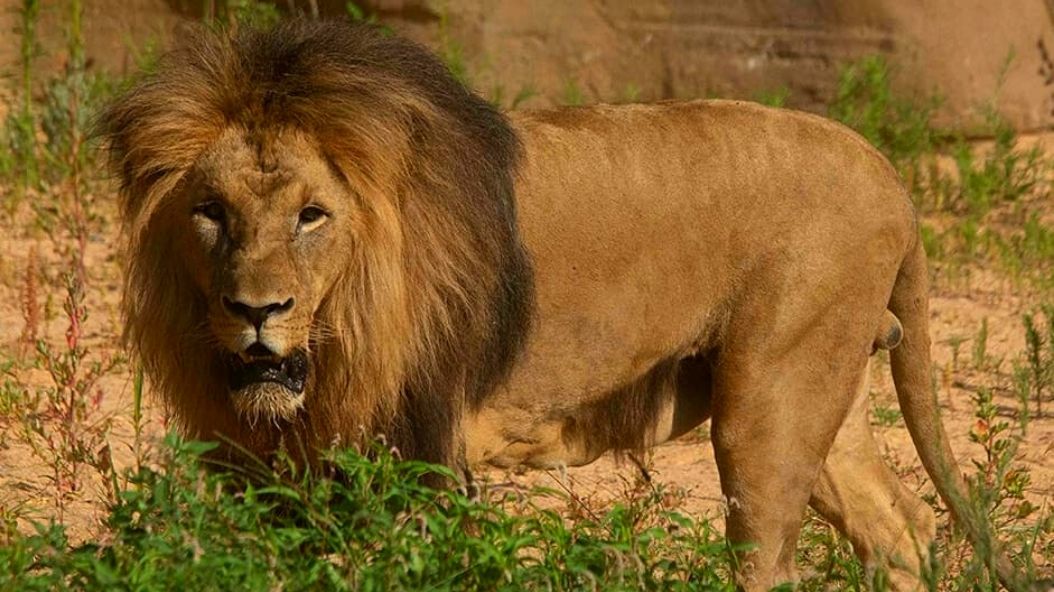 The Zoo's lions have moved home! They were recently moved to a new installation in the Savannah-Sahel Biome, which they share with giraffes, elephants and other inhabitants of that African region. We held the official presentation for the media on 4 August, so that everyone would know about this spectacular new enclosure that helps explain a very vulnerable habitat and improves the living conditions of our charismatic felines.

The installation has a surface area of 2,000 m2, including 400 m2 of sleeping areas, and it consists of dunes and rocks that are similar in appearance to the mountainous areas of the Sahel. It also has a large water area, recreating a guelta (permanent or temporary pockets of water that support aquatic life in dry areas) characteristic of the Sahel, and a small waterfall, which is operational during the region's rainy season (our summer) and serves to fill up the Zoo's guelta whenever necessary. 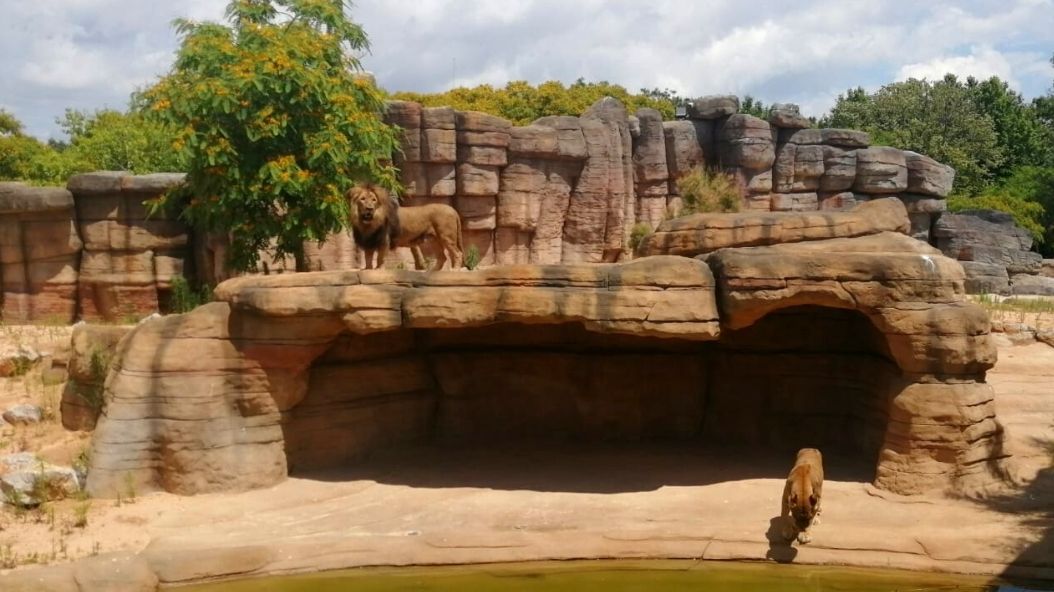 Run-Run, Nima, 16-year-old Zala, and 4-year-old Kiumbe have adapted to their new Sahelian habitat very well. It has been a progressive process, a gradual discovery of the various parts of their new area from a “safe point”established from the beginning, and a slow occupation of what they now consider to be their territory.

They can choose their position in the installation depending on the time of year -more shade or more sun- and they can be observed from four viewpoints without being disturbed. If you are lucky, you can see them close up, separated only by a sheet of glass, and admire their imposing size and all their anatomical features. The general views of the installation are very good and we are pleased with the positive feedback our visitors have given us of the new enclosure.

The difficult situation faced by lions in the wild 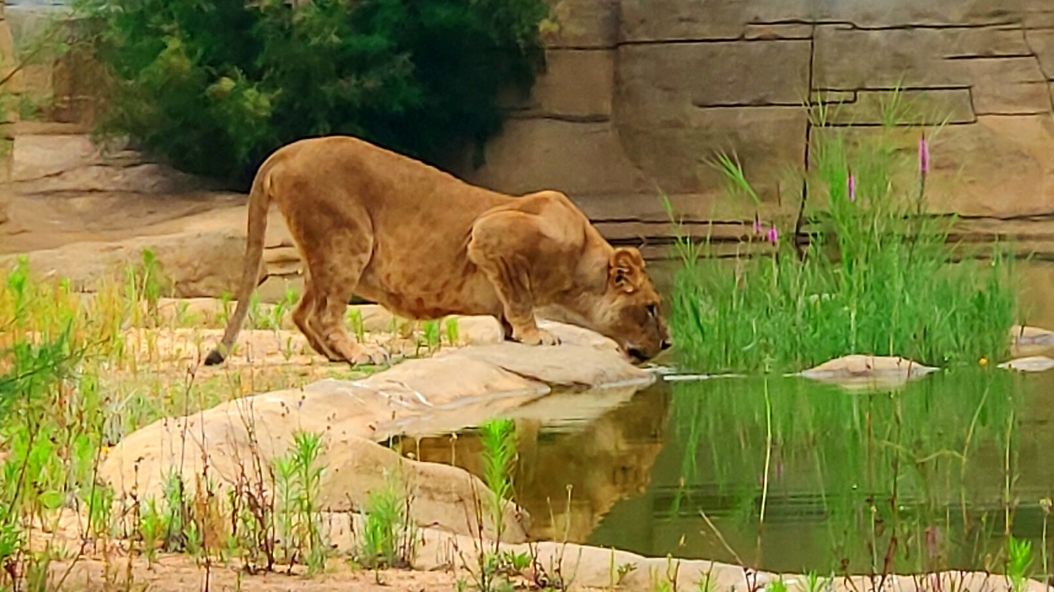 In our mind's eye, we all conjure up images of lions in the African savannah, but their distribution historically extended to the whole of the Southern Mediterranean basin, as well as the Middle East and the mountains of Greece, Macedonia and Bulgaria, where they became extinct during the Roman empire. The most recent subspecies to became extinct in the Mediterranean was the Barbary Lion, which disappeared from the wild at the beginning of the last century.

In the Sahel, there are small, disperse populations, but they are extinct in their original Sahelian areas of distribution.

The lion (Panthera leo) is classified as Vulnerable on the UICN Red List, and it is suffering a potentially irreversible decline in Africagiven that its populations are no longer viable outside the reserves and national parks. Its main threats include indiscriminate hunting, self-defence to protect humans and cattle, the loss and fragmentation of their habitat and lack of prey. 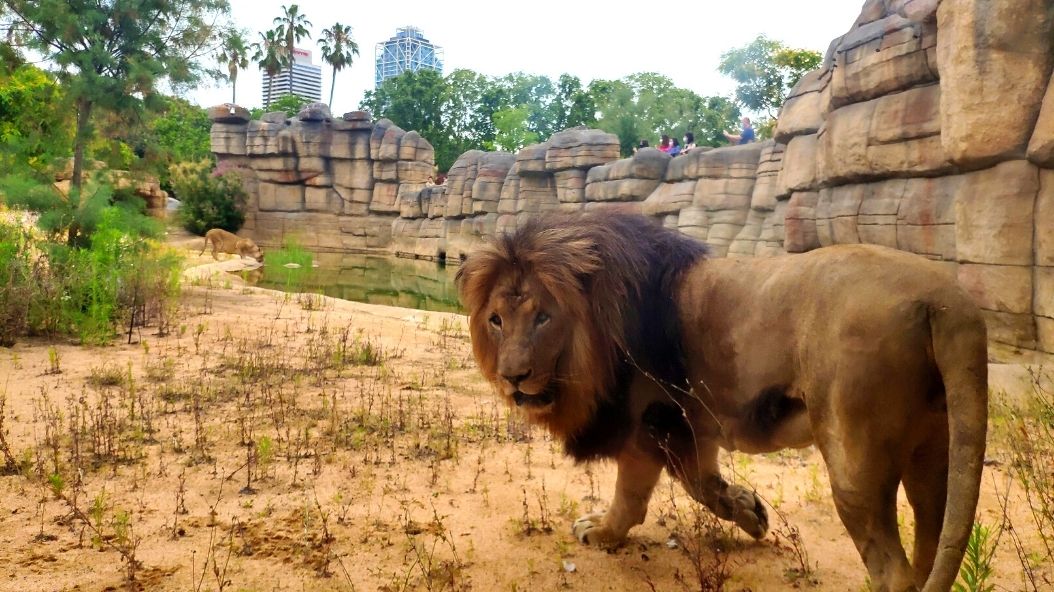 Barcelona Zoo has long been actively committed to the conservation of the biodiversity of the Sahel Savannah, in addition to providing information and raising awareness about its natural values. Our new model focuses on the local fauna, while we continue to take part in projects involving more distant fauna in natural habitats where the expertise and technical skills of our professionals can be of direct benefit to the conservation of biodiversity. This is why we have included this enclosure in the Zoo's current strategic plan, and we are already in the last stages of constructing our large complex dedicated to the Sahelian ecosystem: the third and last phase of the elephant enclosure and a new Sahel Interpretation Centre, the first part of which will be opened in the coming months.

The Sahel-Savannah enclosure, located at the heart of the Zoo, has been designed with the well-being of the  species that inhabit it in mind -elephants, giraffes, lions, dorcas gazelles and mongooses- and is a major teaching resource for explaining the characteristics of the Sahel ecosystem (extremely dependent on a short rainy season, and therefore very sensitive to the effects of climate change) and the animals that live there. It also recreates the vegetation and orography of this predominately flat ecosystem mainly consisting of acacias, grasses and some spurges, using native plants and other species that help to reproduce the landscape, thanks to the collaboration of the Barcelona Botanical Gardens.

The Sahel is a very extensive area of transition between the Sahara desert and the African savannah, crossing the African continent from East to West. Its vegetation is basically herbaceous with few trees and bushes. It is characterised by large, generally flat extensions of land with variable population densities of animals, depending on the region; it has little water, but there are two clearly differentiated seasons -dry and rainy. The countries in the Sahel are: Senegal, Mauritania, Mali, Burkina Faso, Niger, Nigeria, Chad, Sudan and Eritrea.

The region is subject to many threats for many animal and plant species, some of which have already disappeared and are currently being reintroduced, such as the dama gazelle (Nanger dama mhorr), the dorcas gazelle (Gazella dorcas), thescimitar oryx (Oryx dammah), and the African spurred tortoise (Geochelone sulcata), and trees such as the baobab and the 'Koily' (Mitragyna inermes), which are endangered by direct felling and the overgrazing typical of the Sahelian regions. 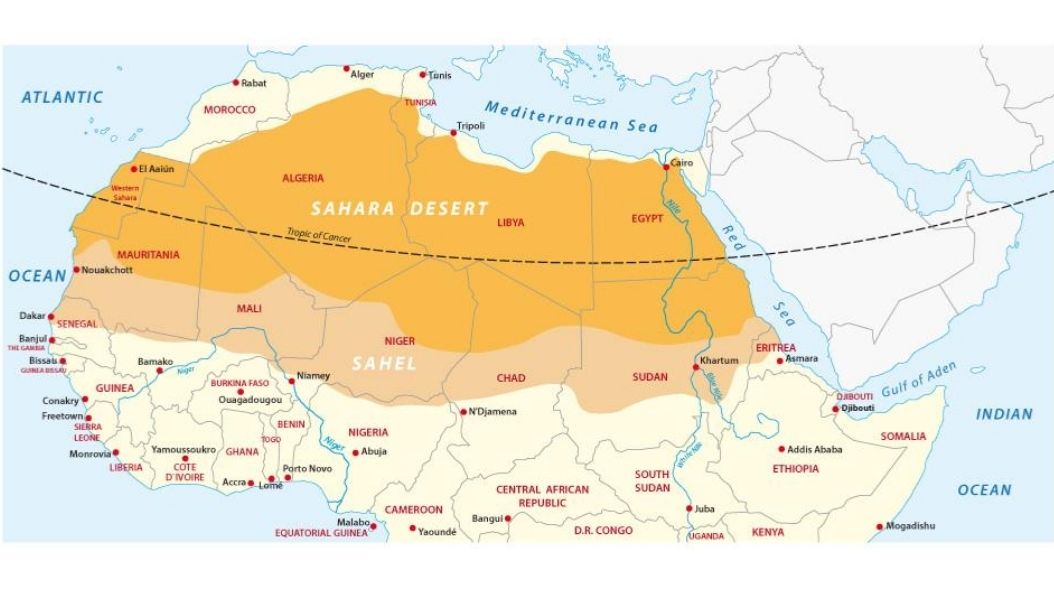 Teamwork in the wild

The Zoo collaborates on projects to conserve and reintroduce some of the Sahel's most endangered species, including the dama and dorcas gazelles, especially in Senegal, together with the Spanish National Scientific Research Council (CSIC). In the coming years, we plan to extend these projects to other countries in the region and to other species.

In the projects located in the Senegalese Sahel, we have always worked with the local population , and in particular with a rural school in the area of Katané, inside the Ferlo Nord Wildlife Reserve. These are people from the Peul or Fula tribe, a nomadic people living all over this extensive region. Prior to the effects of global warming and the region's armed conflicts, they coexisted with their herds and the wild fauna. 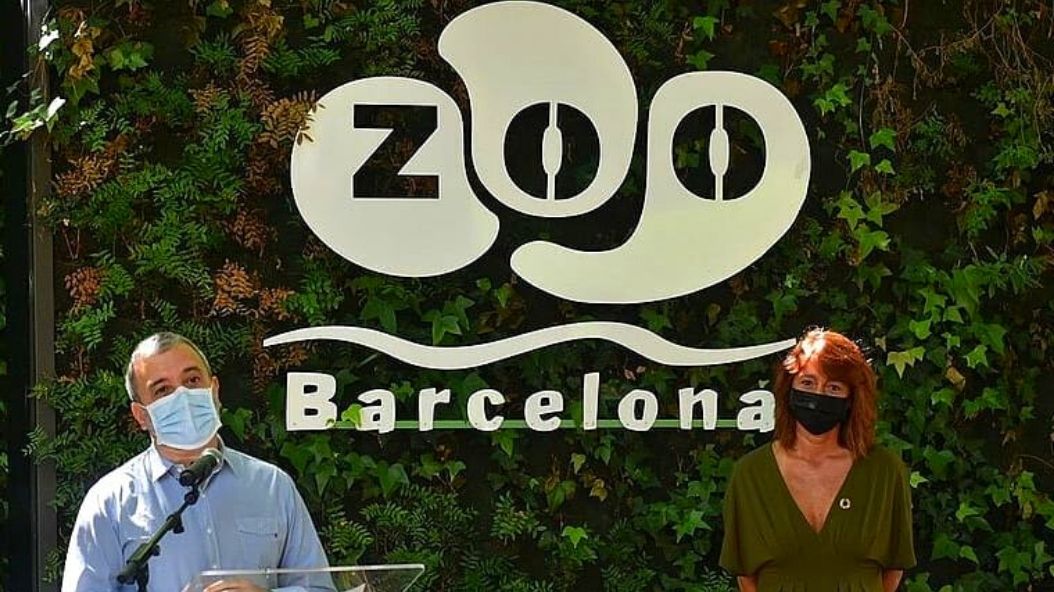 Jaume Collboni, president of B:SM, and Laia Bonet, president of the Barcelona Zoo Foundation's Board of Trustees, presented the new installation to the media, accompanied by the B:SM-Zoo team.