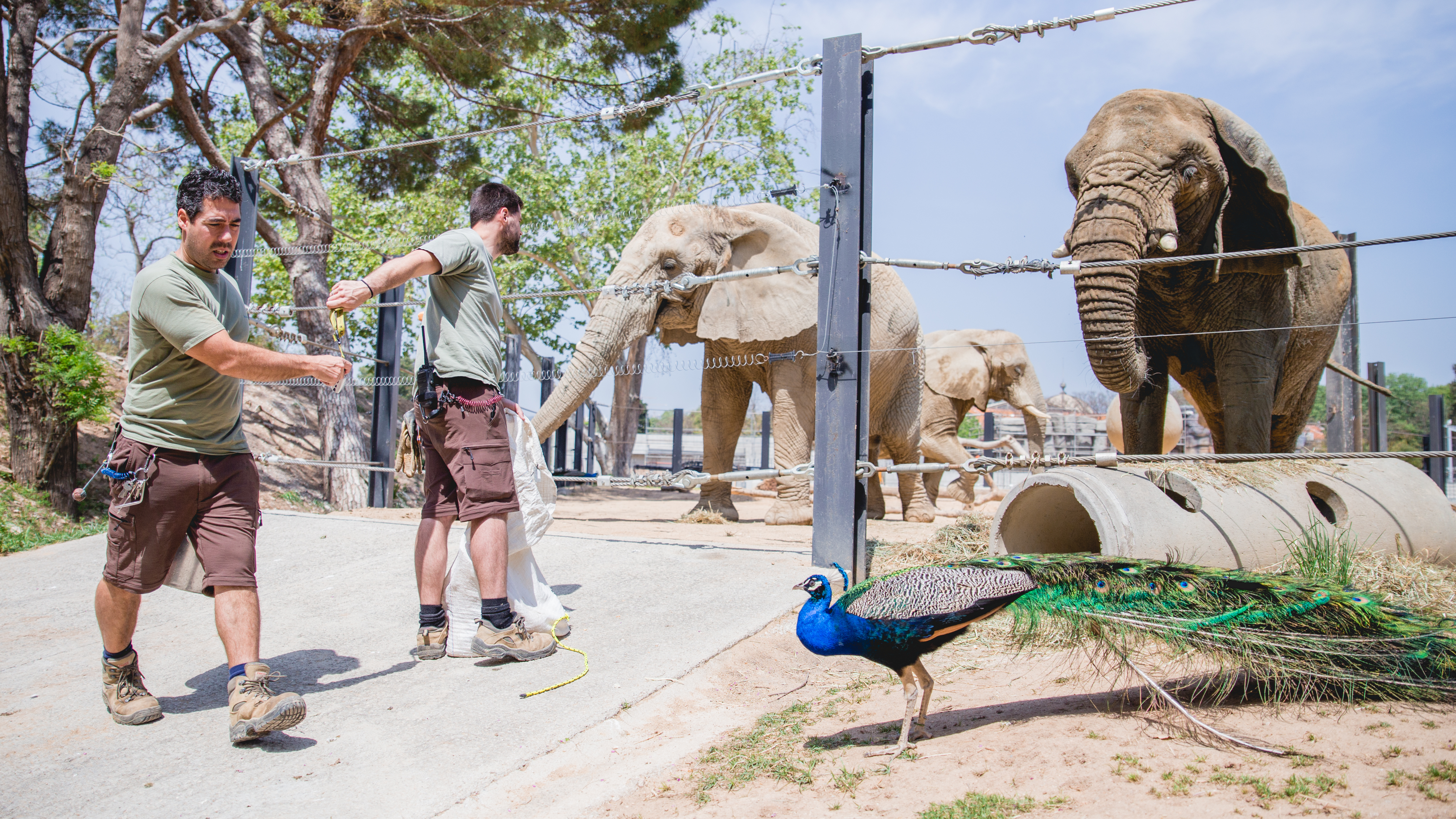 Barcelona Zoo is home to a group of three African elephants (Loxodonta africana), a breed in danger of extinction, who came to Barcelona zoo from different centres but arrived there under similar circumstances: they had all either ended up alone or they had been rejected by their group.

Re-socialising the three elephants called Yoyo, Susi and Bully was always going to be a huge challenge, but the Zoo decided to commit themselves to their welfare and give them a home, dedicating all the knowledge and efforts of the Zoo’s staff to the task. Because the young elephants had been separated from their groups, they needed to be helped through reinforcing essential social behaviours, which led them to gradually start to want to be together and form a cohesive group. It was a long and delicate process that took over a year.

During this time, the technical team, the vets and the keepers had to not only take care of the animals’ physical health, but also their emotional well-being, as the animals arrived at our zoo with both medical and behavioural problems. To make sure they did the job as well as possible, the Zoo contacted one of the best experts on elephants looked after by humans in the world, Alan Roocroft, who acted as adviset to the Barcelona team.  Finally in May 2013, after a lot of hard work, we were able to put the three elephants together. They established a social group from the very first moment, touching and petting each other with their trunks. Since then they have been inseparable friends. They can always be seen eating and socialising together, while never forgetting who is the alpha animal of the group and therefore the one that always takes priority.

Susi is the most laid back of the three elephants, and although we do not know her exact age we think she is the oldest of the group at at least 50 years old. She was captured from the wild to work in a circus. Fifteen years ago, she ended up alone in the last place she was working, which was when she was given a home by our Zoo.

Yoyo’s story is a similar one and we think she is also around 50 years old, but no more than that. She is the leader of the group and unfortunately for many years of her life she was chained up, which has left her with stereotypical physical and psychological scars, and she can sometimes be seen moving her head from side to side, which was the only movement she could make when she was chained up. Thanks to the dedication of the Zoo’s staff during the 10 years she has been with us, the physical problems she had are now under control and many of the stereotypical psychological symptoms she had when she arrived have diminished.

Bully was the last elephant to join the family and she is the youngest of the three. Again, we do not know her exact age, but from the information we have we think she must be around forty years old. Her story is a little different because after some time working in a circus she was then rejected by the group of females she lived with in a new home, so she had to once again be relocated. This was not a good precedent and it seemed that integrating her into a new group of elephants would be a daunting task.  Nonetheless, Barcelona Zoo decided to give her a second chance and after evaluating the behavioural problems she had - which almost certainly derived from the type of circus training she had received - we designed an education and training programme for her, which was followed for some months until we achieved our desired goal - to integrate her into the group! She has now been with us for 6 years.

In this video, Albert Pamies and Pep Xarles, talk to us about their experience with Bully and how fulfilling the vocational work they do with her is:

We are now working on improving our elephants’ habitat, which has been progressively enlarged as other animals have been relocated, and now occupies 6.000 m2. Their Zoo home has got several trees - which will be increased in number and complemented with more vegetation in the future - and a sandy substrate because it is important that the elephants have a soft surface for their joints. Their dormitories are heated and they can go in and out of them whenever they want. Visitors can still see the elephants when they choose to be under cover, through the glass walls. We are also artificially recreating their natural feeding and exploration systems using behavioural enrichment.  For example, we have installed a “programmable tree-hoist”, which periodically throughout the day and night provides food so that the elephants always have ‘leaves’ available to them from this metallic tree. If you come to see the elephants you will notice that there are some cables between the posts provisionally marking the perimeters of their habitat while construction work progresses, which are not very attractive but are placed in a way that that gives the elephants have as much space as possible, and they are also used for fixing equipment that serve as playthings to stimulate the animals.

Yoyo, Susi and Bully are looked after on a daily basis by their keepers, who regularly monitor them and observe their sleeping, feeding and behavioural patterns, among other aspects. They also check the substrate in the installation, prepare them beds made of sand, design behavioural enrichment activities, make them games by hand, and many other things to make them as happy as possible.  Every day through a special training rail, the keepers get the elephants to show them their feet, trunk and ears so that they can be given a pedicure whenever they need one - which is extremely important for their well-being - or so that they can take samples for blood test easily and without causing the animals any stress. This medical enrichment, which is voluntary and is always done using positive reinforcement, is not only very good for them, but they also love it! We announce when these activities are going to take place by loudspeaker so that visitors can see what they are like close up, and how we look after our much-loved elephants with affection and professionalism!