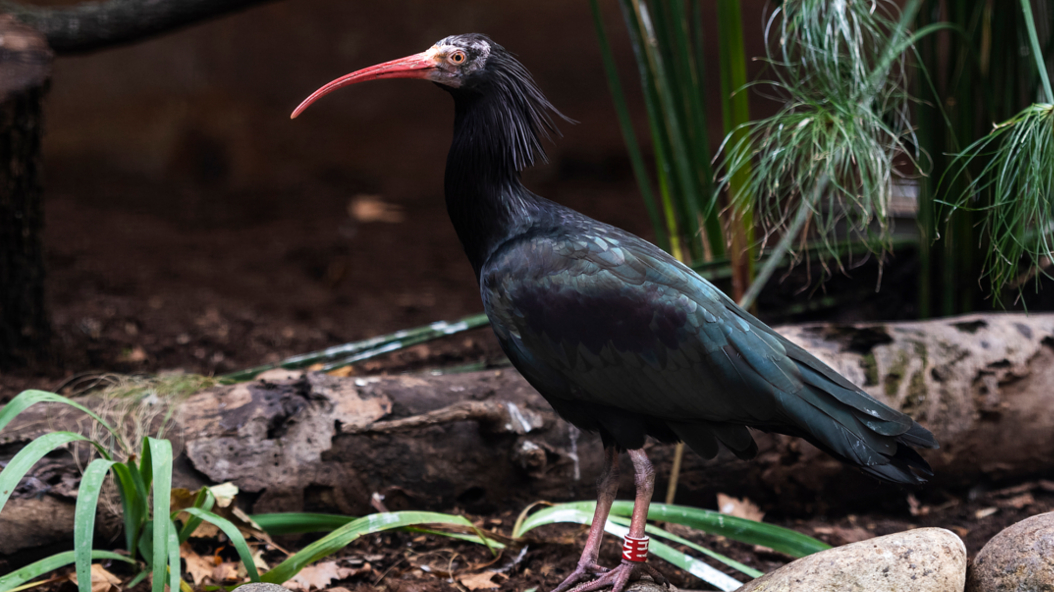 The members of this new species, the Northern Bald Ibis (Geronticus eremita) have already arrived at the Zoo. They are 4 females from Nordens Ark (Sweden), in line with recommendations of the European Endangered Species Programme (EEP) for the species. Four males from Stuttgart Zoo will soon be arriving at the Zoo to mate with them.

This species is on the IUCN Red List of Threatened Species and only exists now in a small population in the south-west of Morocco (close to Agadir) and a few other, smaller, vestigial populations in Syria (Palmyra desert) and Turkey (Birecik). The Northern Bald Ibis was once much more widely distributed, breeding, for example, in Central Europe (Austria, Hungary and Switzerland) up to the 18th century. It migrates to Syria and Turkey and is native to Morocco, from where it spreads out, though we know little about where to. (It has been observed in Mauritania, Senegal and Mali.)

It lives in arid zones on cliffs where it establishes its breeding colonies. It mainly feeds on insects and small vertebrates: amphibians, reptiles and small mammals. It has two separate population distributions; the largest is sedentary and lives along the coasts of Morocco. The other, which is much smaller, is migratory and shuttles between Syria and Ethiopia. Its distribution used to be wider, up to the 18th century, extending to Austria, Hungary and Switzerland.

Not long ago the only known European observation was of a female adult captured in the Guadalquivir marshes in July 1958. Two new observations were also recently made in Spain of solitary members of unknown origin, seen in the vicinity of Piedrahíta (Ávila) and nearby Trujillo (Cáceres), in both cases it would appear, from December 2004 and during the first months of 2005.

There are currently reintroduction programmes for birds hatched in zoos in Austria, Germany and even Spain, as in Jerez Zoo.